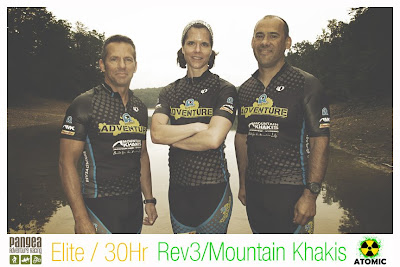 The Rev3/MK Southeastern AR Team (AKA: Team Dysfunctional-Synergy) came together again for a second time in a little over a month to take on the turbulent Toccoa River and the Steep North Georgia Mountains. This time our mission was Pangea Racing’s, 30 hours Atomic Adventure Race. The race course would take place in the high mountains of the Chattahoochee National Forest and centered on Blue Ridge Lake. The different race segments would take us 360 degrees around the lake, and through the towns of Blue Ridge and Morganton as well as slicing through the center along the Toccoa River. The weather report called for rain and thunderstorms with wind, and temperatures that started in the 70s however would plunge into the 50s. The weather would end up being a huge factor for many in the race.
Packet pick-up and pre-race briefing was held the morning of the race. I personally wish more race directors would follow suit with this practice as it almost all but eliminated the pre-race evening marathon strategy sessions that usually lasts past midnight. I also like the idea of teams having to develop a race strategy in a compressed time setting rather than having hours and hours to pour over maps. I was also surprised to see that all CPs were pre-plotted on the maps. Map reading is an integral part of land navigation and accurate plotting of points is an important facet that can mean the difference between success and failure. Although convenient I would prefer that teams have to plot their own points. I think Julie and Chris were both surprised of my politeness as I offered to allow teams to jump the line in front of us at packet pick up…...heh….. (Inside joke, sorry). To the unfortunate sole that did……yep, I’m that guy that doesn’t like that….I just said what everyone else was thinking… I also got a chuckle out of Julie’s disclaimer for me…..”Sorry, he’s an Army guy”…. Priceless…
Once we received our maps we spent a few minutes studying race layout and developing our strategy. The race seemed pretty straight forward. There was to be a short trekking prologue, followed by three Mountain Bike Segments that would be separated by two trekking/orienteering segments, with a paddling segment in the middle. Parts of the biking and paddling segment followed the same areas used during the Blue Ridge AR a month or so earlier. Although the points were in different locations it definitely was a confident booster as a few of our first CPs were on familiar terrain. Even though this was only our second race together as a team we all felt very confident we would finish on the podium. Our strategy was simple, Use every minute of the 30 hours and collect all 40 points.
As we were called to the race start, teams stopped lakeside for race photos before moving to the starting line. We were decked out in the new Rev3/MK race kits which look incredible, and drew favorable comments. After a quick study of the prologue map we were issued at the line, the gun sounded, and we were off! Although we were one of the slower teams during the prologue at 39 minutes, we would quickly make up the lost time with a fast transition to the bike.
The first bike segment was mixture of paved and gravel roads, as well as about 10 or so miles of single/double track on the steep and rocky Flat Creek and Long Branch Loops and the Green Mountain Trail. It was on this segment where I miraculously avoided injury as my front wheel of my bike dropped into a well camouflaged hole sending me over the handle bars on to my head. I carried a pounding headache for several hours and managed to pick up some pretty hideous bruises on my inner thighs and shoulder to boot. This segment also included a river crossing requiring us to swim across a deep section the Toccoa River with our bikes. It was at this point where we realized we had passed all of the other teams save one in route to sweeping all 11 CPs in 5:23:00. Hats off to Julie for supplying the team with floaties to help float our bikes. How did she know I was a SpongeBob fan!


Although the navigation for the second trekking section was pretty easy, I made a tactical error which caused us to lose about 40 minutes. This error was the order in which we attacked the points. The route I selected was fast however it did require us to backtrack to avoid crossing the Toccoa a second time. Looking back with hindsight, I would eliminate the back tracking as we ended up crossing the river anyway as we realized on the ground it was much faster. We swept all five points in 3:13:00 and were still in the top two or three teams. We were right on schedule as planned with our goal of beginning the paddling segment before 6 pm to avoid going through the rapid sections of the river in the dark. Even though we had planned to portage around the biggest set of rapids there were still several sections of turbulent water we had to go through.

Unfortunately the rain had begun to fall and a constant wind was blowing. After an hour or so we were all soaked and cold. We were also very hungry as we had packed food only for eight hours and it was pretty obvious at this point we screwed the pooch on that one. The first CP we went quickly and as we were approaching the second CP which was manned, we were invited up to have a bowl of fresh chili and French bread. I’m generally a pretty focused competitor and try to take every time advantage I can. This however was too good to be true as Chris, Julie and I were all pre-hypothermic, and starving. The 10 extra minutes was well worth it. The water proved challenging however we continued to improve as we moved from rapid to rapid. Once we hit the big rapids we immediately portaged. This was a decision we had made prior since in our last race the decision to ride the rapids ended up in the famed Rev3 floating yard sale. Once we were back in the river we were all surprised how well this segment was going. Then Chris made the statement that doomed us all. ” You know guys; this is the first time in a race I haven’t dumped in the canoe”. That was all it took. At the next segment of rapids a hidden submerged rock pitched the canoe sideways and dumped all three of us in the drink! Damn….. Soon after we hit the flat water and our next CP. We threw on jackets and settled in for a long night of paddling. Our next CP was ashore requiring us to locate an old cemetery and gravestone and record the date of death of the graves resident. After what seemed an eternity of searching we recorded our date, boarded the boat, and finished up the paddling only after finding our final CP and taking an extended tour looking for our transition area. I’m sure the residents of Blue Ridge thought the occupants of our little boat were slightly touched as Julie and I performed a little concert on the water. Highlights were our rendition of “Ole Black Water” “Thunder Road” and a very special performance by Julie of “Move like Jagger” which Chris and I both agree was better than the original. My advice is if you can’t sing well, sing loud! Funny what 6:53:00 of paddling in the rain will do to a person…..


After a change of clothing, food, and restocking of race nutrition and water we were off on the next bike section. This section would take 6:12:00 to complete and we would travel from one side of Blue Ridge Lake to the other before we would sweep all the points and make it climb up to the Brawley Mountain T/A. I think this was a very respectably time considering the time of night, fatigue, and two flat tires. Chris and I both agree that watching Julie fall asleep standing up was priceless.


The final Trekking segment would be where we finally would drop our first points. We simply ran out of time. We determined we would need three hours to get back to the finish on the final bike leg so we made the decision to go for only four of seven CPs. We would unfortunately have to climb Brawley Mountain three times. Once we collected our CPs we moved back to Brawley Mountain one last time to our bikes (only after a second offering of Chili by the staff at the top). Trekking segment two: 4:22:00.


The final bike segment would take us back to the TA. Teams would have the option of collecting five points along the route back. It appears after nearly 24-27 hours at this point, many decided to hightail it to the finish. Unfortunately we determined we would only have time to gather four of the five CPs. A necessary decision but unfortunately hard to swallow at the time (Great call Chris). Looking back it would have been a moot point since we would more than likely been over the time limit. Final Bike Time: 2:46:00
Overall it was a great race. The Pangea Race Staff did an outstanding job designing a course that was hard yet flowed very well. All transition locations were logical and points were for most part located as marked. I would recommend however a bit more effort should have been put in the post race activities. The food was great however it would have been nice to have some cover to eat under. Having volunteers, food, and competitors all under one pop-up shelter in the rain didn’t work well. The prospect of juggling a small, overloaded plate with a drink in the rain, standing in the mud after a 30 hour race made me not want to eat. Next was the award ceremony. Pangea needs some work on that one. Lots of teams out there racing, lots of first timers, lots of great finishes. The race staff seemed intent on promoting the Pangea Club as well as their races however only recognizing the top two teams at the finish seemed rather cheap. Just sayin…. Rev3 Epic does it right for sure!


Final Roll-up:
We finished in fourth place overall and 2nd Place in the Coed Elite Division. We raced for 29 hours, 28 minutes. We spent 8 hours, 14 minutes trekking, 6 hours, 53 minutes paddling, and 14 hours, 21 minutes on the bike! We gathered 36 of 40 points. Only one team cleared all 40 points. Chris made some great calls and was a big help to me navigating at times when I would second guessed myself. Julie…what can I say. Girl can ride the sh*t out of a mountain bike. Who needs brakes, right?